Orchha’s grandeur has been captured in stone, frozen in time a rich legacy to the ages. It was founded in the 16th century by the Bundela Rajput chief captain Rudra Pratap who chose this stretch land along the Betwa River as an ideal site for his caption of the succeeding rulers. From here the view of soaring temples spires and cenotaphs is spectacular. 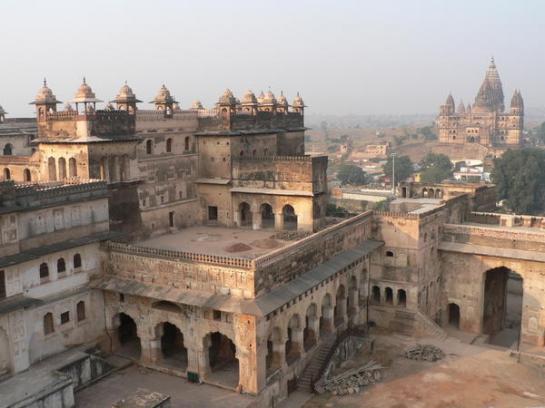 Situated to the right of the quadrangle this was built by Madhukar Shah, the deeply religious predecessor of Bir Singh Ju Deo. The plain exteriors crowned by chattris, give way to interiors with exquisite morals, boldly colorful, on a variety of relies themes. 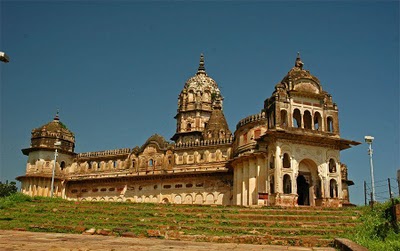 Ram Raja Mahal- Madhukar Shah’s wife once had a dream that she should install the idol of Lord Rama at Orchha, which she brought from Ayodhya. It was kept in the palace, now known as the RamRaja Temple which is the only temple where Rama is worshipped as king.

The temple with its wonderful improvised style, and its magnitude, dominates the town area of Orchha. As its name implies, it is dedicated to the “four armed” Vishnu and its layout visually reproduces these four arms. Built by Bir Sing Deo (1606-1627), the temple stands on a huge stone pedestal, about 15 ft high, reached by a large flight of steps leading up to a porch.

The interior’s contains the most exquisite of Orchha’s, wall paintings covering the walls and ceiling of three halls, these murals are vibrant compositions and cover a variety of spiritual and secular subjects. They are in an excellent state of preservation with the colors retaining their vivid quality.

Book your holidays in orchha with Luxurious Amar Mahal and experience the grandeur of historical architecture in this beautiful hidden town of marvels.